It has been a common notion in work that spending more time in doing a task will result to greater productivity. This idea is further encouraged by many employers by rewarding those workers that spend more time behind their desks. They are considered contentious and diligent workers and thus rewarded with bonuses and increments in pay. In reality, such practice encourages laziness and equality of work among workers to the detriment of the company’s growth and development.

This is where Pareto’s Principle, or the 80/20 Rule, should be applied to reverse the ill effect of the old system in management.

Tim Ferris discusses at length Pareto’s Principle in his bestseller book “The 4-Hour Work Week”. This principle states that “roughly 80% of the effects come from 20% of the causes”.

Pareto Analysis is a statistical technique used in selecting of a number of tasks that produce significant overall effect. It forwards the idea that by doing 20% of the work, 80% of the benefit of doing the whole job can be generated. In quality improvement however, it is viewed that problems are caused to the trivial many (80%) by only a vital few (20%). 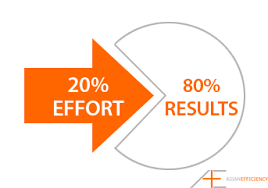 Tim Ferris writes that Pareto’s principle can be applied to everything and eliminate the 20% that is causing 80% of the trouble. The following analysis of the principle proves him right:

By applying Pareto’s Principle, most everything in life, be they about business or personal, can be streamlined to the more important few and make our lives simpler and thus giving us more time to enjoy it.

Incidentally, Pareto’s Principle is named after Vilfredo Pareto, an Italian economist who presented a formula 1897 showing the uneven distribution of wealth, with about 80% of the wealth in the hands of about 20% of the people